What’s on my iPhone – Part 1, The Home Screen

I’m very particular with my apps and how I manage them on my devices.

I have a method to how I manage and organise apps:

Being a long time Apple user, I am fully entrenched in the Apple/iCloud eco-system. Most of my apps sync wonderfully with iCloud across all of my devices. Other apps sync using Dropbox, Google Drive or similar, to my work computer that runs Microsoft Windows.

Being an app junkie, a collect and manage a lot of apps (more than 200 different apps at the time of writing this article), and I’m always looking for new apps and alternate apps that might do a better job that a default, or one that I’m currently using. I have personal rules for how I select apps, based on my philosophy of simplicity, functionality, and usability.

As a preview and in summary, I have four screens:

Here’s my iPhone 7 Plus home screen: 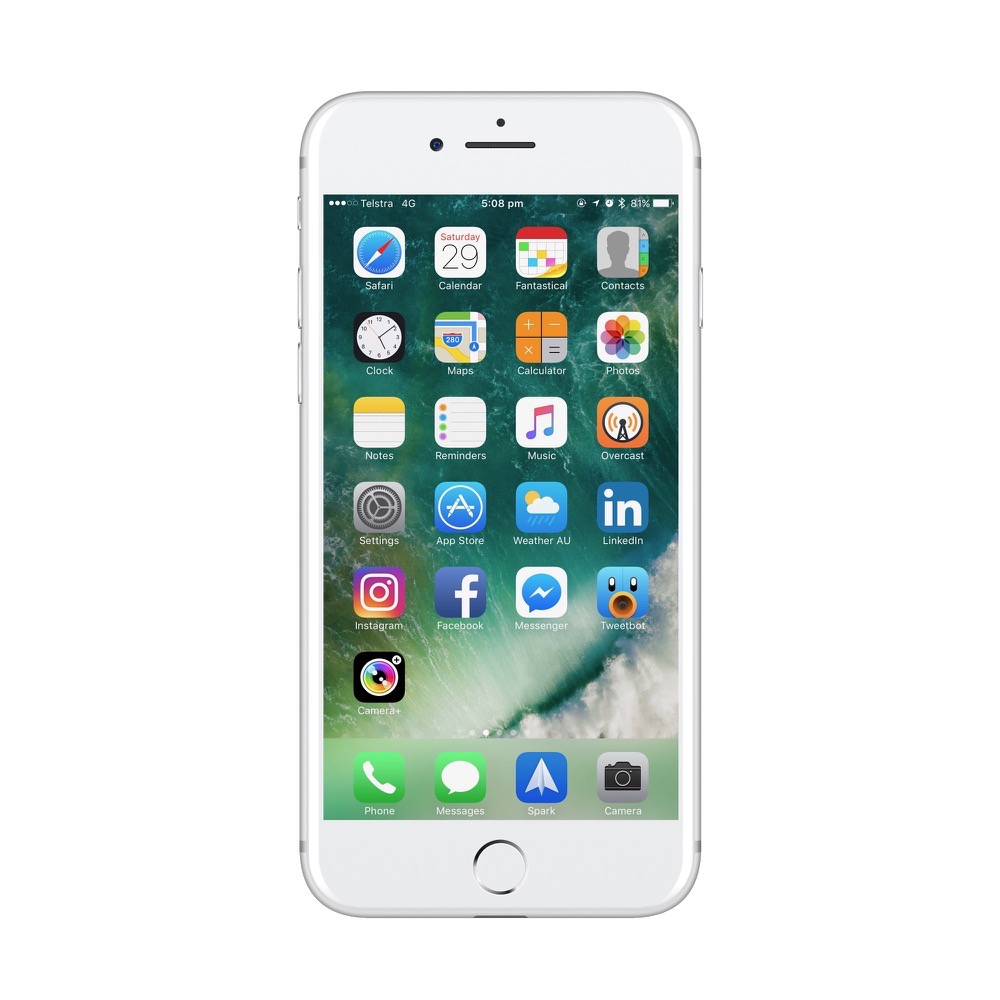 Safari
Safari works so well in my Apple ecosystem across all my iOS and Mac OS devices. All my bookmarks are perfectly and quickly sync’d across all devices. Reading List allows me to quickly list a page that I want to view later on another device. Passwords are stored and accessed from Apple keychain across all devices.

Calendar
I only use the default Apple Calendar app for its dynamic icon that shows today’s date. For my everyday calendar, I mostly use Fantastical.

Fantastical 2
Fantastical is the best calendar app on the App Store. The user interface and design is easy and syncs to iCloud seamlessly. New events can be entered using real English and automatically translated into calendar format.

Contacts
I haven’t yet found a better contact manager for my use than the default contacts app that syncs across all my devices.

Clock
The default Apple Clock app does the job well. Functions include; world clock, alarm, stopwatch and timer. The app integrates well with Siri, and is very easy to use. I have recently been using other timer apps that can show multiple timers, the the Apple Clocks app is always a goto. it would be great if the world clock was able to time shift, but there are other apps for that.

Calculator
The stock Apple Calculator app does the job, it’s just a calculator. Rotate the phone to the side and it becomes a scientific calculator.

Photos
Apple Photos is the best photo manager. It syncs perfectly with iCloud and make all of my photos available on all of my IOS and Mac OS devices. All of my photos are automatically backed up, I don’t have to worry about my photos.

Notes
The default Notes app does the job. I have tried other apps, but keep coming back to to Apple Notes for its iCloud integration.

Reminders
I’m sure I could find a better reminders app that perhaps can integrate other apps, but for now the default Apple app does the job. I have been testing various todo apps that may replace the Reminders app in the near future.

Music
Apple Music is the best overall music streaming app, and has effectively replaced iTunes. I subscribe to Apple Music and consume and download as much as I want. I just haven’t had a need for other popular streaming apps like Spotify.

Overcast
I have used most podcast apps, and keep coming back to Overcast. Overcast does most things very well. The excellent layout makes it very easy to navigate, especially in the car. I often listen to news and sports radio shows that are broadcast as podcasts. I wish there was a way to tidy up and purge podcasts after a week (as the Apple Podcasts app does), rather than a quantity.

Settings
I have the settings app on my front page, because I don’t want to hunt around for it. It’s easily accessible for when I need to get into various settings.

App Store
I’m an app junkie, I love finding new apps. My iTunes account is always topped up when iTunes gift cards are on sale.

Pocket Weather Australia
This is the weather app that I am using at the moment. I used this app a while ago, until they lost their way with a poor user interface design. Recent updates have gone back to basics, and now shows the right information in the right way. I have Weather AU customised to show (in order); current temperature, week forecast, daily forecast, observations, and rain radar.

LinkedIn
LinkedIn is the best business networking app. I use LinkedIn daily, and have my own process for how I use it.

Instagram
Since Instagram closed down their API, this is really the only way to use Instagram on the iPhone. I only wish Instagram would provide a grid viewer to allow multi images to be shown, and lists to make it easier to filter follows.

Facebook
I have a love/hate relationship with Facebook. It’s just the default way to stay in touch with family and friends. I just wish I could view my timeline in chronological order, rather than the promotion algorithm that Facebook imposes.

Tweetbot
As an early adopter of Twitter (I’ve been using it April 2007), I’ve used most apps. Tweetbot just gets the edge over Twitterrific for me. Tweetbot, like most Twitter apps easily manages multiple Twitter accounts.

Camera +
I find that Camera + is the best app for when you need more camera control, particularly manual control, that the default Apple app doesn’t provide. Camera + seamlessly saves to the Apple Photos app.

Phone
The default way to make telephone calls. I don’t even know if there’s another app to make calls.

Messages
Apple Messages is the best messenger app but doesn’t work for non-Apple people, so I need to juggle multiple messenger apps. I can easily send text, photos, and videos. I don’t do emojis or stickers.

Spark
I have recently sort an alternate to the default Apple Mail app, and like Spark for now. I manage multiple email account and types from my email apps: Gmail, Outlook, and POP/IMAP. Spark implements a ‘smart inbox’ very well by pigeon holing; newsletters, notifications and new mail. Unread emails can be cleared very quickly by swiping right to the next one.

Camera
The default Apple Camera app does the job of taking photos reasonably well, and is fully integrated with the iPhone and iOS. The iPhone 7 Plus camera is the best camera that Apple has. Even as a photographer, the iPhone camera has pretty much replaced my standalone point and shoot camera. I use a collection of other camera apps such as Camera + when I require more manual control.

What’s on my iPhone series: